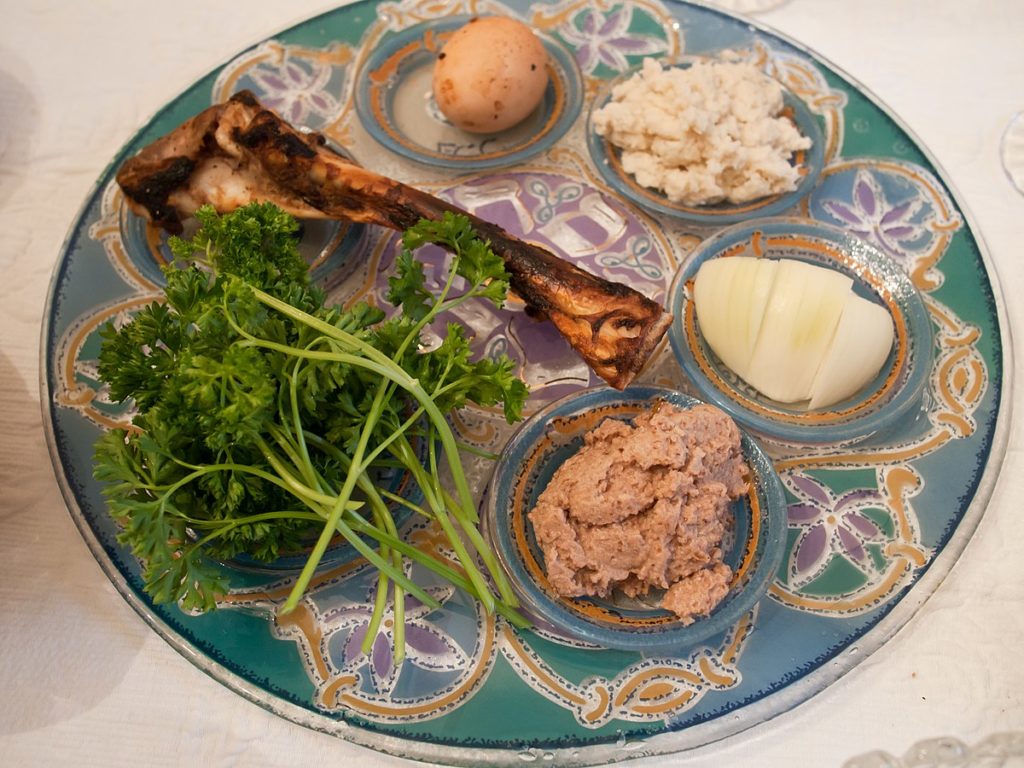 Pesach is celebrated from the 15th to the 21st of Nissan, the first month in the Jewishcalendar.Surprisingly,perhaps, the new Jewish year begins in the seventh month. This may not seem so strange to us when we remember that in the secular world, as well, we are used to operating with different calendars for different purposes. The secular New Year begins on January 1st, but the school year on September 1st, the university year towards the end of October or the beginning of November, etc. There are other “years” for budget, tax and liturgical purposes. In the Jewish calendar, the year begins in the seventh month, that is, in the autumn, while the months begin in the spring. The 15th of Nissan, the first night of Pesach, is usually the first full moon on or after the spring equinox. Pesach and Easter—often called “Pas’cha”—have close ties. Both have egg symbolism, both celebrate rebirth and renewal, both are festivals of spring. “Easter is a re-formulated understanding of Pesach in the light of the crucifixion andresurrection. It is a fest of liberation from slavery (of death.).”

Pesach commemorates the Exodus of the Hebrew slaves from Egypt under the leadership of Moses, which is believed to have occurred around 1300 BCE. The Exodus story is not only the most important event in the formation of the people of Israel; it also represents a universal message of freedom and redemption. Pesach is also known sometimes in English as Passover. Both names—Pesach and Passover—refer to the last of the ten plagues, mentioned in Exodus 7-12. In Exodus 12: 27, in describing the killing of the Egyptian first-born sons, the text says, ”…the Lord passed over (Hebrew:pasach) the houses of the Children of Israel in Egypt, when he smote the Egyptians…”

Jewish households begin their Pesach preparations well in advance of the festival itself, sometimes as a kind of opportunity for “spring cleaning,” so much so that in modern Hebrew, the expression, “la’asot Pesach” has come to mean “to clean and make order”, no matter what time of the year it’s done. But the Pesach cleaning has a particular purpose—to rid homes of “chametz,” leavened bread and related products, in fulfillment of the Biblical verse, “Seven days shall you eat unleavened bread; as the first day you shall put away leaven out of your houses; for whosoever shall eat leavened bread from the first day until the seventh day, that soul shall be cut off from Israel.” (Exodus 12:15.) If one happens to walk into a Jewish supermarket or grocery store during the week ofPesach, one will most likely see that the shelves containing cakes, biscuits and other products with leavening have been covered. Instead of regular bread, Jews eat during that week a flat, unleavened bread called Matzot, which can be square or round. Many people completely change over their dishes, cutlery, pots and pans for the festival.

The first night is a celebration largely centered in the home and family, called theSeder. In modern Hebrew, the word means “order” and this is indeed the most highly ordered evening of the Jewish year, with mandated prayers and blessings, readings, songs, symbolic foods. The book used for this celebration is called theHaggadah—literally, “telling”—and the purpose of the ceremony is to retell the ancient story so that each and every person at the Seder will feel as though he personally came out of Egypt. As one can well imagine, “coming out of Egypt” has taken on symbolic significance, especially in the Jewish mystical tradition, so that it may refer to many different kinds of national and personal liberation. The Haggadah incorporates texts from many different periods of Jewish history, beginning with the Bible, but focusing mainly on the Rabbinic commentaries. Contemporary Haggadot reflect different ideological approaches to Jewish life, including feminism, socialism and the need for Jews to support the liberation movements of other peoples. But for most families, the Seder is probably less an opportunity for ideological discussion and more a time for bringing the relatives together for traditional foods and songs remembered from childhood. Sociological studies of Jews in Israel and in the Diaspora have shown that even in very secular families, some type of Seder is preserved. In many homes, the major emphasis at the Seder is on involving the children, since the purpose is to transmit the story from generation to generation.

It may seem strange that a festival of freedom involves so much preparation and order. But this may be an indication that the Jewish concept of freedom isn’t a “free-for-all.” True freedom does involve a social order in which the rights of the weak are protected. One of the major themes of Pesach is identification with the poor, the stranger, the widow and the orphan. Massive drives are undertaken in the weeks preceding the holiday to make sure that poor families will have enough provisions for their Seder.

The first and seventh days of Pesach are full holy days, with restrictions on our activities (although not as stringent as the laws of Shabbat, the chief difference being that on a festival, we can cook.) The first day commemorates the Exodus itself, while the seventh day recalls the Parting of the Red Sea (Exodus 14 and 15). However, the intermediate five days are only half-holidays, called Chol HaMoed, roughly, “the non-sacred part of the holy festival.” On those days, although the special dietary restrictions still apply, there are no restrictions on movement. For Jewish families, this is a time of many family trips and picnics. Especially popular are trips to the Galilee to see the spring flowers in bloom. As a matter of fact, one of the Biblical readings for this festival is the Song of Songs, which provides a magnificent description of this season when “the winter is past, the rain is over and gone, the flowers appear on the earth…” (2:11-12.) Liturgically, on Pesach, we stop praying for rain and begin praying for dew.

The general Hebrew term for festival is chag, from the same root as the Arabic word,haj. The haj, of course, is the pilgrimage to Mecca undertaken by devout Muslims as one of the five pillars of their faith. In ancient Israel, there were three pilgrimage festivals to Jerusalem, also known as the Shalosh Regalim. (“Pilgrimage“ in Hebrew is calledaliyah l’regel and may be an ancient play on the words for “foot” and “occasion.”) The three pilgrimage festivals in the Jewish calendar are Pesach, Shavuot and Sukkot. The appropriate greeting for all three would be Chag Sameach, “a joyous festival.”