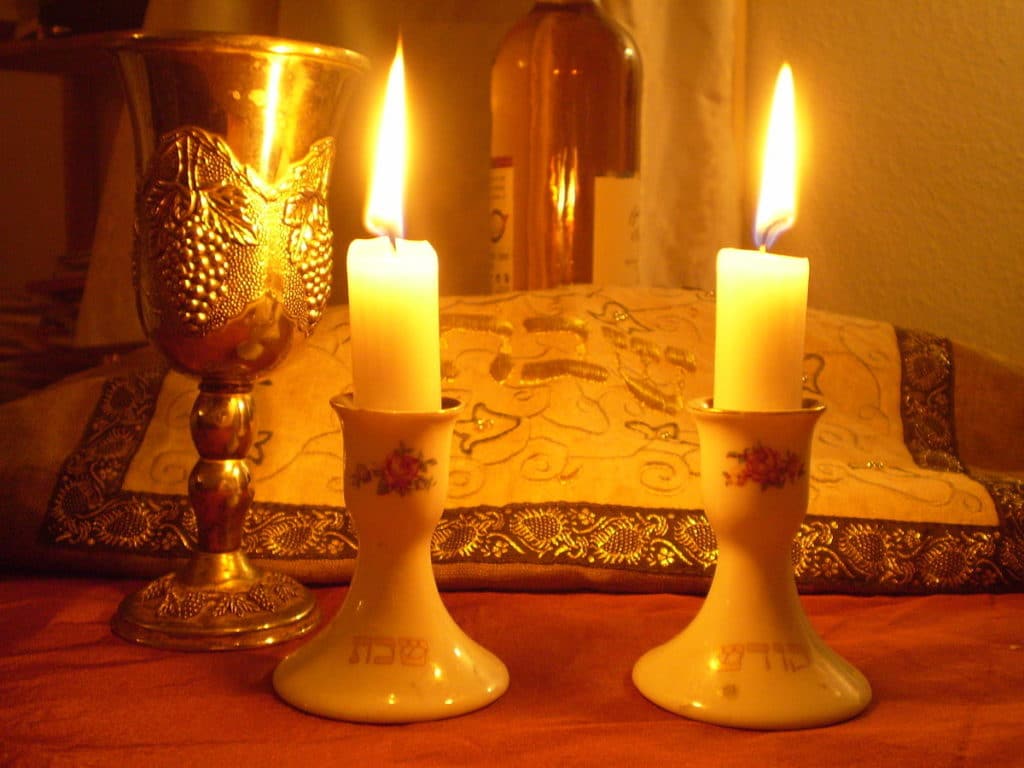 In the Hebrew language, six out of the seven days of the week do not have names. They are, rather, “the first day,” “the second day,” and so on, up to “the sixth day.” Only the seventh day has a name—Shabbat, the Sabbath. The root of Shabbat is resting, refraining from work. But the traditional Shabbat is much more than simply a day off.

A comparison of Genesis 2:1-3 (the first Sabbath) with Exodus 20:7-10 (the Commandment to remember the Sabbath), reveals that the Shabbat is an act oftestimony to God’s Creation of the World, as well as a kind of imitatio dei (emulating God’s example of rest.) For traditionally observant Jews, the Shabbat involves a fairly complex series of restrictions on “work,” defined in the Talmud in ways that far exceed what we today might perceive as work—any kind of creative intervention in the natural world. Thus, a religious Jew can not ride, write, cook, handle money, use electrical appliances, speak on the telephone, and do many other things that intuitively don’t seem to involve all that much physical effort. The framework thus created is one of rest and relaxation, but is also infused with sanctity through prayer, Torah study and both home and synagogue rituals.

Secular Israelis, feeling that Shabbat is often their only real day off, may prefer to spend the day on picnics and family trips, or at the beach, when weather permits. Debates over what public services should or should not be open on Shabbat—especially those involving transportation, culture and entertainment—have occasionally become the focal points for vociferous and even, unfortunately, violent struggles in Israeli public life.

Some religiously observant Jews, encountering difficulties in their rigorous observanceof the minutiae of Jewish law, might even turn to a “goy shel Shabbat.” This is a traditional term for a non-Jew who, not obligated in the strict laws of the Sabbath, may help a Jewish neighbor by, for example, turning the electric lights on and off, as needed. Many Jews, however, do not want to make their observance dependent on someone else working, so they try to find other solutions—for example, the use of a pre-set electronic timer. Pioneers in this type of problem-solving have been the religious kibbutzim (many located in the Bet She’an Valley or the Gilboa area), which, for example, have developed pre-timed milking machines to help with the issue of milking cows on Shabbat.

But, apart from the strict laws of what Jews are not supposed to do on Shabbat, there are all the positive commandments and practices. First, there is the matter of preparing for the special day. Most Jewish families, even the less religious ones, clean their homes, shop and prepare the meals, bathe and put on special clothes. Many attend synagogue services at sunset, then come home to a festive family meal. The synagogue service on Friday evening is especially festive, often with much singing of psalms and liturgical poems. The most famous of these is “L’cha Dodi,” a 16th century work which personifies the Sabbath as a Bride.

For some families, this may be the only night of the week when the entire family sits down to a meal together. The Shabbat is inaugurated in the home with candle lighting, and special blessings are said over the wine (Kiddush) and bread, or challot (HaMotzi.). Traditional Jews bless two loaves of bread at each of the Shabbat meals, as a remembrance of the two portions of manna that fell on the sixth day, in preparation for resting on the Sabbath (see Exodus 16:22). Often, special Shabbat songs (Z’mirot) are sung around the table, and the meal may end with singing a festive Grace After Meals. This type of ritual may be repeated the following day at lunch, and, in some cases, also at a third festive meal Shabbat afternoon (Seudah Shlishit.)

Every Jewish community—the Eastern Europeans, the North Africans, the Yemenites, etc.—has its own Shabbat delicacies. But one type of food is common to all: thecholent or hamin, a delicious stew that cooks in its own juices overnight. Because of the prohibition against cooking on Shabbat, Jewish communities throughout the world used to put all sorts of ingredients in a pot on Friday and leave it to cook in the oven until it would be taken out the following day for the noon meal.

The main religious service of the week is held in the synagogue on Shabbat morning, and at its center is the ritual reading of the weekly Torah portion. Some Jews would then spend the rest of the day reading, resting, visiting friends and family. Others may go to the synagogue and then go to a soccer game. But for all Jews in Israel, Shabbatis a special day—it’s the only day that the newspapers aren’t published, there is no school for the children, there is even special cultural programming on the radio and TV (obviously, this isn’t intended for those religious Jews who observe the Shabbatcompletely and wouldn’t turn on their radio or TV.) The 20th century American Jewish philosopher Abraham J. Heschel characterized the Shabbat as “a weekly exercise in profound living.”

The official end of the Shabbat is marked both in the synagogue and in each home with a ceremony called Havdalah (making a distinction). The ceremony, which involves candlelight, wine and spices, expresses our hope that the light, joy and beautiful fragrance of the Sabbath will continue to bless us during the coming week.