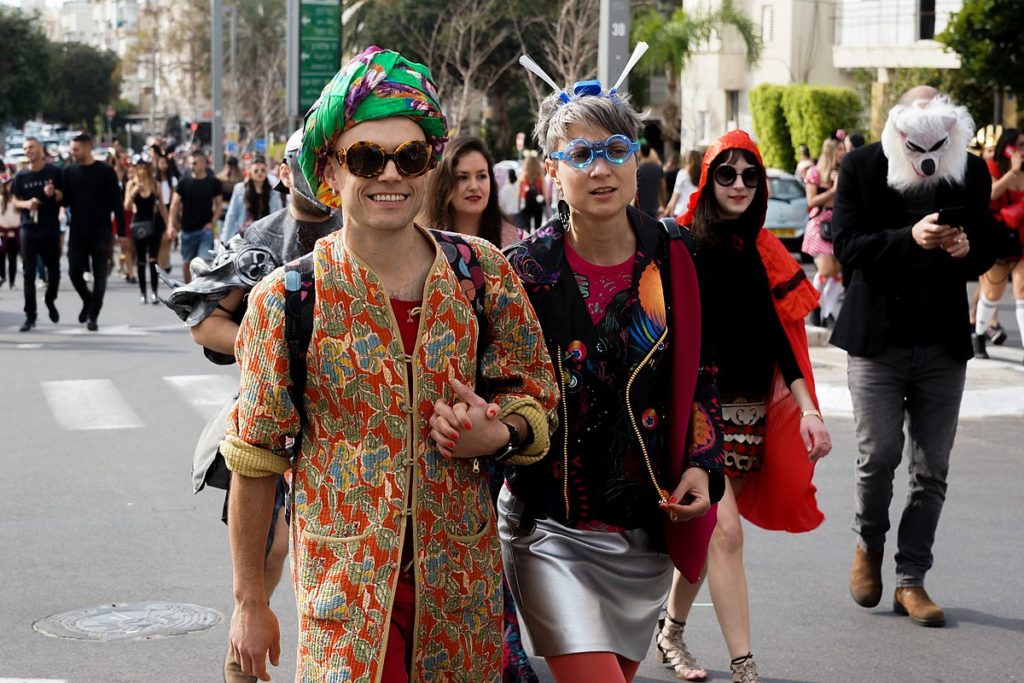 Adar is the twelfth month of the Jewish calendar. The Talmud says that from the beginning of this month, “we increase our joy.” The joy of Adar is because of the festival of Purim, celebrated on the 14th of the month, except in Jerusalem, where it is celebrated on the 15th. Every now and then, when the 15th of Adar falls on a Shabbat, the Jerusalemites celebrate three days of Purim, on the 14th, 15th and 16th!

This is only one of the many strange features of this most unusual festival. Another is that on Purim, it is a religious commandment to become intoxicated to the point where one can no longer distinguish between “Blessed be Mordecai” and “Cursed be Haman.” And for almost a week before, one may see children (and sometime even adults!) dressed in costumes, while on the day itself it is not only permitted but mandated to poke fun at the things most sacred to us.

On the surface, Purim commemorates the peculiar sequence of events described in the Book of Esther. In ancient Persia, a megalomaniac leader (Haman) convinced a foolish king (Ahasuerus) to allow a massacre of all the Jews. Through the intervention of the king’s adviser, Mordecai, and his beautiful niece, Esther, who had been chosen queen in a beauty pageant, the evil was averted, or, more correctly, the Jewish community was granted permission to defend itself. The story progresses through palace intrigues, as well as a series of banquets and parties. At the end of the book, Mordecai and Esther declare a festival for the Jewish people to celebrate their salvation from destruction, by giving gifts to the poor and packages of food to friends. This is the only book in the Hebrew Bible in which the name of God isn’t mentioned, even once. (In many Christian editions of the Bible, that are additional chapters in the Book of Esther, originally written in Greek, in which the name of God does appear, but, as mentioned, they are missing in the Hebrew.)

Jewish commentaries on the Book of Esther have suggested that it is only on the surface that the story appears to lack a divine dimension. Thus, it emulates ones own perceived reality, which sometimes also appears to be godless; God’s intervention in the world is discernible when one probes below the surface and add the prism of faith.

The story can be analyzed as a paradigm for the Jewish experience in the Diaspora:assimilation, anti-Semitism, relations with the authorities, responses of the community to distress, self-defense. Since one of the important responses in times of trouble is Jewish solidarity (“Go, gather together all the Jews…” Esther 4: 16), the commandments mentioned above—gifts to the poor and portions of food (Esther 9:22)—are commandments which promote social solidarity.

One of the major customs on Purim is dressing up in costume. On a certain level, the festival is really about identity—personal, as well as group—and the relationship with the Other. One of the ways to relate to the Other is, quite literally, by getting into his shoes. Or, perhaps by confronting the Other within us.

A well-known Rabbinic dictum, not originally mentioned in connection with Purim,maintains: “A person’s character is evident through his anger, his cup of drink and his pocket. Some say also his playing/laughing.” Unfortunately, the alliterative nature of the Hebrew is lost in translation, but still, we can take this statement and apply it to Purim.We’ll go in reverse order: Purim is the quintessential occasion for Jewish humor, and the origins of the modern Hebrew and Yiddish theater lie in the satiric Purimshpiel(Purim play.) The “pocket” of the Jew is evident in the outpouring of charity and gifts. Drinking, as we said earlier, is mandated, but hasn’t generally led to violence or other unacceptable behavior (see below.) Anger at the anti-Semitism of the Gentile world is evident, but generally muted.

It wouldn’t be fair if we didn’t admit that some of the extreme fringe groups within the Jewish community in contemporary Israel, particularly the settler community, have, unfortunately, used Purim to commit acts of vandalism against their Arab neighbors. The worst example was the atrocity committed in the Cave of the Machpela on Purim1994, when innocent Muslim worshippers were massacred at prayer, by a settler. But we believe that these behaviors are not mandated by the heritage of the festival. On the contrary, the tradition provides us with a wonderful model of how aggression, even when justified, can be channeled in a non-destructive way. There is a Biblical commandment to “blot out the memory of Amalek” (see Exodus 17 and Deuteronomy 25:17-19.) At first glance, this seems to be, God forbid, a prescribed genocide. Haman was a descendant of Agag, the Amalekite (see Esther 3:1 and I Samuel 15:8.) The way we fulfill the commandment of wiping out the memory of Amalek is that when the Book of Esther is read in the synagogue on Purim, we make noise at every mention of Haman’s name. What a wonderful way to sublimate feelings of anger and aggression. If only all of us could find such creative ways of dealing with frustration!

For religious Jews, Purim includes reading the Book of Esther in the synagogue both at night and the next morning. There is a family or communal feast, with much joking, drinking, singing, dancing, skits. Gifts of food are distributed among friends, as well as charity to the poor. For both religious and non-religious Israeli Jews, Purim is a time for costume parties, parades and other events. It is the closest thing we have to the “Carnival” in Rio.

One of the traditional Purim delicacies in many Jewish communities is triangular pastries filled with poppy seeds, nuts, chocolate and other sweets. In Hebrew these are called Oznei Haman (“Haman’s ears,”) while in Yiddish they are called hamentaschen(“Haman’s pockets.”)

One final word about this festival: why the difference between Jerusalem and the rest of the cities? In the Book of Esther, the fighting in the capital city, Shushan, continued an extra day beyond the rest of Persia (see Esther 9:17-18.) So the Jews of Shushan celebrated their miraculous deliverance a day later than everywhere else. The Rabbiswanted to give the holy city of Jerusalem at least as much honor as Shushan, so they mandated that in Jerusalem, the festival would be celebrated on what is called Shushan Purim, not the day of Purim itself. They felt that although Purim was essentially a Diaspora festival, within it, special status would still be accorded to Jerusalem.

The common greeting would be Purim Sameach.

Sources for further Biblical study: The Book of Esther